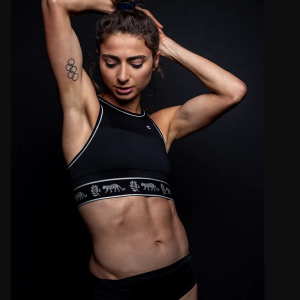 Alexi Pappas (@AlexiPappas) joins the ladies to talk about being an olympian, good vs bad pain, and about her new movie Olympic Dreams (co-starring Nick Kroll!). The ladies also cover running marathons, the best way to deal with challenges, and when to give up. They answer a lady problem from a listener who’s having trouble finding a relationship when her job constantly relocates her to different countries.

Lady to Lady is headed to Boise, Idaho March 7 & 8! Head over to https://ladytoladycomedy.com/see-us-on-tour/ to learn more and get your tickets!

Barbara’s doing a LIVE one-woman show called “Babs Do It” at the Lyric Hyperion in Los Angeles! Get your tickets and check it out on Sunday February 23rd.

Head on over to Patreon.com/LadytoLady to listen to our February Bonus episode AND our steamy weekly Top Secret Session. It’s ~too hot~ for the regular feed.

Alexi Pappas is a 2016 Olympian and an award-winning actor and writer. ​

Alexi is currently writing a book of essays, “Bravey,” in partnership with Random House. Alexi’s writing has been published in the New York Times, Lenny Letter, and many more. Alexi has been profiled on the cover of the New York Times Sports Page, in Rolling Stone, on NPR’s All Things Considered, and was also featured on the cover of Runner’s World Magazine’s 50th anniversary issue alongside Kevin Hart, named as one of the two faces of the “new boom” in running.