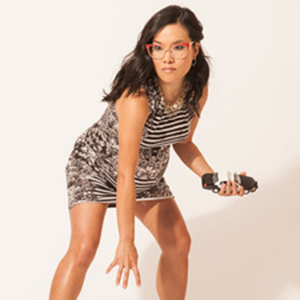 Ali Wong joins the ladies to discuss shopping addictions, the Food Network, accidental anorexia and more! Then The Dink aka D.C. Pierson drops by to talk about being an unemployed, homeless radio DJ.

Ali Wong is a stand-up comedian, writer and actress. Her breakout Netflix special “Baby Cobra” premiered Mother’s Day weekend 2016 to critical acclaim. Since then she has thrown out the first pitch at a Giants game and appeared on Ellen. In 2017, she became the very first artist to sell out 8 shows at the SF Masonic Theater. She is voicing the co-lead and executive producing the upcoming Netflix animation show, “Tuca and Bertie” alongside Tiffany Haddish.
This summer Ali is starring in a Netflix movie that she co-wrote with her long time friend and creative collaborator, Randall Park. Her debut book for Random House will come out in 2019.