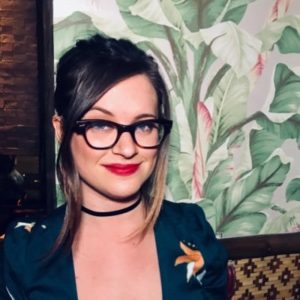 But Does She Even Have A Podcast? with Allie Goertz – Episode 281

Allie Goertz (Everything’s Coming Up Simpsons and @midnight), joins the ladies to get into “The Simpsons,” and what it’s like to host a podcast about the iconic show. The ladies delve into cults and Scientology…and we all take a look back at our AIM names.

Tess calls out the girl who beat her out for the role of Ruby Sue in “Christmas Vacation,” (Link to her imdb here.)

Allie Goertz is an American musician. Goertz is known for her satirical songs based on various pop culture topics.

Subjects of her songs have included the film The Room, the character Milhouse from the television show The Simpsons, and the game Dungeons & Dragons. Her style has been compared to that of Bo Burnham.

In December 2015, Goertz released a concept album based on the Adult Swim series Rick and Morty, Sad Dance Songs, with the album’s cover emulating the animation and logo of the series. The album was made possible through Kickstarter.She is co-host of Everything’s Coming Up Simpsons podcast, formerly known as Everything’s Coming Up Podcast, a Simpsons-focused podcast along with Julia Prescott.

Goertz also served as a social media producer for @midnight. She is now an editor at Mad magazine.