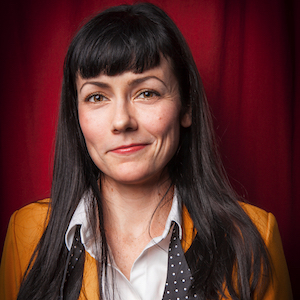 Bros Made of Snacks – with April Richardson – Episode 305

April Richardson stops by before she hops on a plane to move to the UK! She and the ladies decipher British slang, swap dating horror stories, and sing Gritty’s praises. They also talk about the power of The Secret, Brexit, and what would happen if Billy Bob Thornton was president. They answer two lady problems: one about moving to be close a long-distance boyfriend, and one about how to make friends in a foreign country.

Shoutout to Erica from Bakersfield for sending over some delicious vegan snacks!

If you haven’t subscribed to our Patreon, you’re missing out on some fun! Head over to www.Patreon.com/ladytolady to donate to the $1, $5, or $10 level and reap the rewards of bonus content.

Originally from Atlanta, Georgia, she moved to Los Angeles after graduating from college. Growing up, she was always obsessed with comedy & was always, as the expression goes, the “class clown.” She never realized you could get paid for being obnoxious & disruptive until she moved to L.A. and got a job on E!’s hit show Chelsea Lately — Hollywood dreams, they do come true!

Since Chelsea Lately ended, she has toured and appeared on Comedy Central’s hit show @midnight. She currently co-hosts the weekly show Almost Genius on TruTV with her friend Chris Fairbanks.