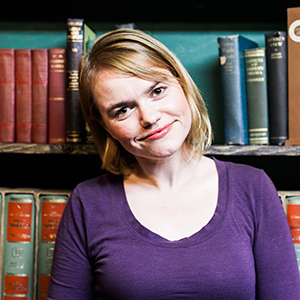 Carrie wasn’t raised in a religious home, but became engrossed in religion at the age of 13, when she accepted Jesus into her heart (although he no longer works there). She once exorcised a demon, used to own a chakra chart, and has spent countless dollars on “detoxifying” foot baths, Bach flower remedies, homeopathic “medicine” and psychics. She doesn’t believe any of that stuff any more, but she often hopes she’s wrong.

Carrie lives in Los Angeles with her boyfriend, rescued doggy (Ella Poppy TM), and a healthy collection of books on religion, paranormal studies, philosophy and science. She earned a master’s degree in investigative journalism from the University of Southern California in 2015. In 2017, she was featured on NPR’s TED Radio Hour, where she discussed her TED talk about the hunt for the paranormal. The talk has been seen by over a million people.