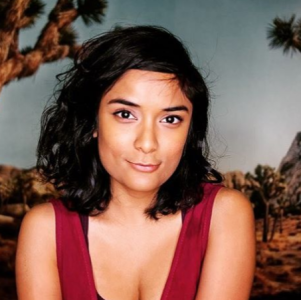 Christine Medrano (@ChrissyMeds) stops by to chat about her WIkiFeet ratings, IMDB message boards, and getting escorted out of a Vegas casino. The ladies also talk about high school hazing, ass cracks, and the dreaded low rise jeans. They answer a lady problem from a listener who wants to go braless and not feel self-conscious about it.

Stay hydrated while drinking less liquids with Liquid IV! Get 25% off your order by going to LiquidIV.com and using code L2L at checkout.

Go to ThirdLove.com/LADY to find your perfect-fitting bra and get 15% off of your first purchase.

Start working on healthier habits with Noom! Sign up for your free trial today at www.Noom.com/LADY.

Christine Medrano is a tiny stand up comedian who was born and raised in the cold streets of Winnipeg, Manitoba, and could best be mistaken for a Canadian Dora the Explorer. Her humor is what happens when a mixed race woman grows up in the suburbs while attending 14 years of private Catholic school. Her thoughtful, reflective and self-deprecating comedy is anchored by her boundless energy.

She appears regularly as a crew member on the Youtube show Good Mythical Morning (15 million subscribers) is a featured player and writer for College Humor and Dropout. Her short film which she stars and co- wrote has been screened at Tribeca, Outfest and Outfest Fusion, Frameline, Heartland Indyshorts, and numerous film festivals in the United States and Internationally.

A unique point of view has helped make her a finalist for Sirius XM’s Canada’s Next Top Comic, a feature at the Laughing Skull Comedy Festival, and an opening act for Maria Bamford. She has appeared in numerous videos for Cracked, Buzzfeed, Refinery29, Funny or Die, Comedy Central and All Def Digital, and featured on HBO’s Entre Nos: Part Four in 2018 and in the Wanda Skykes Epix series.