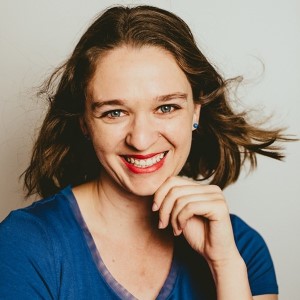 Ella Gale (@HellaKale) joins the ladies to talk about being a tall girl, Christian Hip-Hop, and our doomed environment. The ladies also talk about Space Jam, what Jabba the Hutt must feel like, and battle over macaroni salad and potato salad. They answer a lady problem about a mom who’s repeatedly crossing her daughter’s boundaries, causing a rift.

Head over to Patreon.com/LadytoLady to support the show and get access to ad-free episodes, exclusive merch, and more!

Get 15% off of your perfect-fitting bra by going to www.Thirdlove.com/LADY.

The Austin Chronicle has described her as ‘exceedingly clever’, and named her one of Austin’s must-see comics at the 2016 Moontower Comedy Festival. A sharp, witty writer, she tries to keep her nerdiest jokes a little dirty and vice versa. She has performed at Bridgetown and the Chicago Comedy Expo.

Ella has contributed to Reductress, and is the co-creator of Burrito Makes Three.

Originally from Colorado, Ella began her comedy career in Austin, TX, where she created Naughty Bits (a show that gave comedians sex advice based on their jokes) and performed with sketch group Comedy Bazaar and Austin comedy powerhouse Master Pancake.