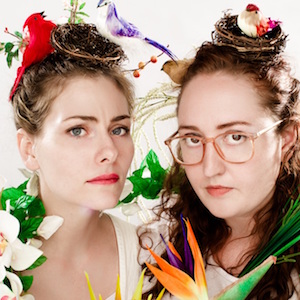 Baby Geniuses takes over Lady to Lady. Emily Heller and Lisa Hanawalt host with guest Aisling Bea for a bizzaro edition of Lady to Lady. The Ladies took over Wham Bam Pow, so make sure to go check out that show as well!

Emily Heller is a comedian and writer who likes you very much. If you watch TV, you may have seen her tell jokes on her own half hour special for Comedy Central, Late Night with Seth Meyers, Conan, The Meltdown with Jonah and Kumail, John Oliver’s New York Stand Up Show, Maron, Inside Amy Schumer, @midnight, Chelsea Lately, or as a series regular on the TBS show Ground Floor. She has been named a “New Face” at the 2012 Montreal Just For Laughs Festival and a “Comic to Watch” by both Variety and Comedy Central. She has served as a writer on TV shows for Fox, NBC, HBO, and TBS, most recently the 2018 Bill Hader series Barry. Along with Lisa Hanawalt, she is also the cohost of the long running podcast Baby Geniuses on the Maximum Fun network. Her debut album Good For Her is available now on Kill Rock Stars. As far as nicknames, she prefers “Hell Bone.“.

Lisa is the production designer/producer of BoJack Horseman, an original animated series for Netflix. She has written & illustrated two books published by Drawn & Quarterly: My Dirty Dumb Eyes, 2013 and Hot Dog Taste Test, 2016. She grew up in Palo Alto, California, and graduated from UCLA in 2006. She co-hosts a podcast called Baby Geniuses with comedian Emily Heller, on the Maximum Fun network. She lives in Los Angeles.

Lisa has worked on illustrations, book covers, animation, comics, murals, music videos, patterns, apparel, and exhibits her artwork in galleries. She is represented by UTA and Defiore & Company.

Aisling recorded her first short special for Netflix in Atlanta in February along with some other fantastic US comedians. This should be available on Netflix worldwide by the Autumn.

She has appeared on almost every TV panel show in the UK and in 2016 became the first ever female team captain of long running show 8 Out Of 10 Cats with Jimmy Carr. She is part of the 2017 cast of hit Dave show Taskmaster and is a regular on big shows like Qi (BBC1/ Netflix) with Stephen Fry and now the inimitable Sand Toksvig, 8 Out of Ten Cats Does Countdown (Ch4), James Corden’s A League of Their Own (Sky), The Big Fat Quiz of Everything (Ch4), @Midnight (Comedy Central US) and The Last Leg (Ch4).