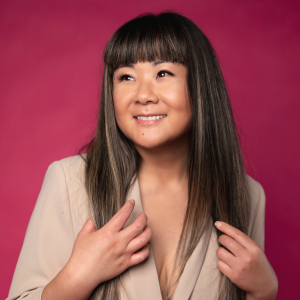 Jenny Yang (@jennyyangtv) joins the ladies to talk about feeling shame, who buys those weird pills at 7-Eleven and Brandie tells stories about driving for Lyft. Jenny also talks about getting engaged, they play This or That and they answer two lady problems about getting over a guy and not having sex with a boyfriend anymore!

Jenny Yang is a former labor organizer turned stand-up comedian, writer and actor. Jenny will play “XING” a loyal female assassin the the upcoming Netflix dark comedy “The Brothers Sun” starring Michelle Yeoh and Justin Chien. Jenny voices Carissa, Beef’s (Nick Offerman) new “mommy club” friend in season two of Fox’s hit animated sitcom, “The Great North.” In 2020 she was selected as one of Variety’s “10 Comics To Watch” and Vulture’s “Comedians You Should Know.”  Jenny is the season three host of Mailchimp and Pineapple Street Studio’s “Going Through It” podcast where she interviews outstanding people about unexpected lessons they learned from their elders. As a television writer, Jenny has worked on HBO Max’s “Gordita Chronicles,” Netflix’s Peabody-award winning animated show, City of Ghosts, two seasons of Fox’s “Last Man Standing” and E!’s late-night talk show “Busy Tonight” with Busy Philipps. She is the creator and host of “Comedy Crossing” a hit standup comedy show held inside the Animal Crossing video game and watched live via Zoom. During the height of the pandemic, the show raised nearly $40,000 for #BlackLivesMatter-related causes. Taiwan-born and Southern California-raised, Jenny was honored by President Obama as a “White House Champion of Change” for her leadership in “Asian American and Pacific Islander Art and Storytelling” in 2016.