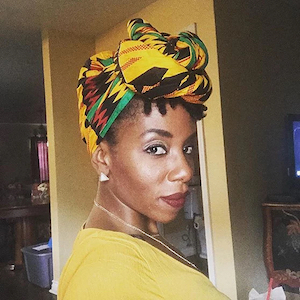 Kristal Adams drops by to chat about being sensitive as a comedian, her many trophies, the Freshman 15, and the stand-up business. The ladies also discuss beauty pageants, crying at work, and choosing a million dollars over love. They answer a lady problem from a concerned sister who wants to see her hilarious brother pursue a career in comedy.

To get 15% off your purchase of $100 or more, go to modcloth.com and enter code LADY at
checkout.

Get $20 off AND free shipping when you use promo code LADYTOLADY at Brooklinen.com.

Visit Gotrinova.com/lady2lady and use Promo Code: LADY2LADY to get 20% off your first TriNova products.

Kristal is an LA based comedian and the host of The Cookies & Sweatpants Show, a loungewear-required comedy show at Flappers Comedy Club in Burbank, CA. She has opened for performers such as Liz Miele, Don Friesen, Taylor Tomlinson and many more prominent, touring comedians. She also works regularly in alt shows such as Baron Vaughn’s New Negroes at UCB and Gentrification as well as clubs such as The Comedy Store, MI Westside Comedy Club and the Hollywood Improv. Kristal’s comedy is fresh and personal, drawing on events in her life and tying them to current, relevant issues. Over the past year, comedy has taken her on the road as a featured act on shows in New York, San Francisco and Idaho.