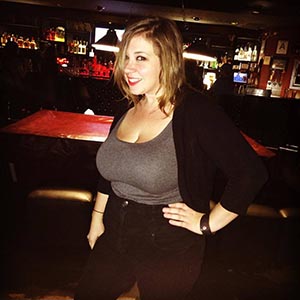 Lisa Chanoux is a Los Angeles based, Arab-American writer and stand up comedian with razor-sharp wit that will leave you wanting more. A natural in performance classes in college, Chanoux continued her theatrical training in long form improv and sketch writing at Upright Citizen’s Brigade after graduation. After she completed the core curriculum there, she spent a year performing on a weekly improv team at The Improv Space in Westwood while simultaneously producing a bi-weekly standup show in Eagle Rock, CA.

She’s no stranger to clubs or alternative shows, and has performed stand up at comedy clubs, theaters and alt venues all over the country.  Chanoux showcased her feminine rock-and-roll style of comedy at the 2016 Hell Yes Fest in New Orleans. She was a stand out performer at the 2017 AstroChella Comedy and Music Festival in Idyllwild, California.

Chanoux has been a guest on highly rated and reviewed podcasts “Lady to Lady” and “Views from the Vista.” On screen, she has appeared on JASH TV’s “Future Garbage.” She has also performed in digital sketches for director Bianca Cristovao, Chatterbox Comedy Night, and the Lipstick Liberal.

Chanoux’s podcast, Rumor Has It, bluntly explores the ways gossip harms, while guests share their own juicy tales. She hosts Chatterbox Comedy Podcast alongside the rest of the Chatterbox Comedy Crew, where hosts riff and interview various guests about the latest news and their personal lives.  She reviews comedy show and open mic bathrooms on her blog “Bathroom Humor,” which bathroom-goers call a must-read.