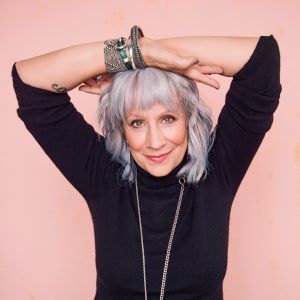 Lizz Winstead (@LizzWinstead) joins the ladies to talk about reproductive rights, trusting your instincts, and the comedy special she filmed during quarantine. The ladies also discussed cancel culture, vibrators, and 20 something guys’ gross apartments. They answer a lady problem from a listener who’s debating trying to start a romantic relationship in her friend group.

We’re doing a fun voicemail episode the week of the election so we don’t get Sizzler’d again! (aka release an episode hyping up a candidate that… might not win. Sorry, 2016 listeners). Call in to (661) 523-2423 and let us know what you’ve been up to, how you’re coping, and any funny and crazy stories you want to share. We want to hear from you!

Lizz Winstead is one of the top political satirists working today. As co-creator and head writer of Comedy Central’s “The Daily Show,” she forever changed the way people get their news. In 2004, Winstead also co-founded Air America Radio, while also co-hosting “Unfiltered” every morning with the Rachel Maddow and Hip Hop legend, Chuck D. Her book of essays, Lizz Free or Die, was published by Riverhead Books in 2012.

Winstead is a prominent abortion rights activist, and one of the founders of Abortion Access Front (formerly Lady Parts Justice League), a team of comedians, writers, and producers that uses humor to destigmatize abortion and expose the extremist anti-choice forces working to destroy access to reproductive rights in all 50 states.