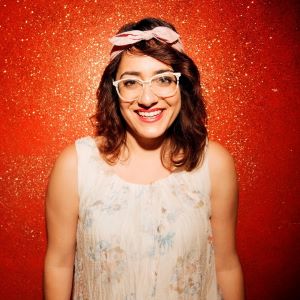 Marlena Rodriguez (@MarlenaRodgriz) joins the ladies this week to talk about Clubhouse, hot Disney villains, and keeping plants alive. The ladies also discuss cackling, The Giving Tree, and skywriting. They answer two lady problems: one from a listener who’s working for a new shitty boss, and one from a listener who wants to ask someone out at work.

We have new merch! Check out our awesome new cropped hoodies, dad hats, and more at www.exactlyrightmedia.com/lady-to-lady-shop.

Marlena Rodriguez has been writing and performing comedy since birth. She’s toured with The Second City, performed stand up around the world, and written for HBO’s Silicon Valley, Tina Fey’s Unbreakable Kimmy Schmidt, HBO Max’s Close Enough, and more!

In 2016, Marlena became a fellow of the Sundance Institute Episodic Lab with her script DMV, and later that year, was named one of Comedy Central’s Comics To Watch. You may have already seen her stand up at Glasgow International Comedy Festival, San Francisco Sketchfest, New York Comedy Festival, or opening for Aparna Nancherla, Adam Devine, Gilbert Gottfried, or Michael Che.

Marlena has been described as “equal parts sly, crazy, sassy, subdued and has clearly studied closely that particular flavor of Midwestern wack-a-doodle”. A vibe carried into the webseries she’s written, self-produced, and starred in, called, We Have To Move, as well as a Bouncers, co-produced by Mas Mejor/Broadway Video.

Marlena recently made her TV debut with a Stand Up Special on HBO titled, About Last Night. In December 2019, she became one of the few Latinas to do stand up on a major TV network with her set on NBC’s A Little Late with Lily Singh.