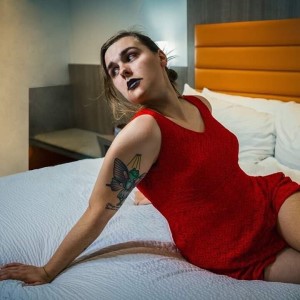 Mary Jane French (@MaryJaneFrench) talks with the ladies about her Oprah obsession, Melissa Joan Hart, and the coolest parts of Richmond Virginia. They also talk about peeing in the pool, flash mobs, and taking a trip to Dave and Buster’s.

They answer a lady problem from a trans listener whose fiancee’s mom is cold and rude to.

Want more Lady to Lady? Visit us over at Patreon.com/LadytoLady and consider contributing for access to ad-free episodes, bonus content, and more!

Keep your cold drinks cold! Visit Brumate.com and add code LADY at checkout to get 15% off of your first purchase.

Keep track of your fertility with Ava! Get $20 off of your first order when you go to avawomen.com/LADY and use our code LADY.

Mary Jane has been performing Stand-up since she was 18-years-old, with a brief hiatus after accepting her need to transition. When Mary Jane began performing stand-up again, now publicly as an out trans person, she began cultivating material that captured her early experiences with transition and recorded that material in a home-made special entitled Mary Jane French: Bearded Woman. Mary Jane’s sophomore release is a split EP, Live at Gallery 5, where she does all of her material that she knew wouldn’t apply after she received bottom surgery. Currently Mary Jane is performing regularly and unleashing gender chaos upon the world one set at a time.