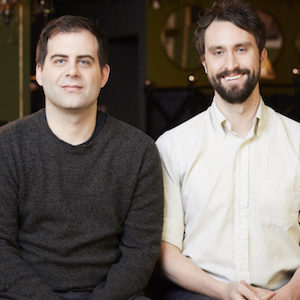 Matt Ingebretson and Jake Weisman join the ladies to talk about their new show “Corporate” on Comedy Central and Tess starts the new year with a special announcement. They talk about how surreal it is to be on billboards and the best graffiti they’ve seen drawn on their faces so far as well as the the best names for private parts.

Jake Weisman co-created, wrote and stars in Comedy Central’s newest scripted series, “Corporate,” which premiered on January 17, 2018. He is a writer, comedian and actor who has garnered viral online and national attention as one of the best upcoming comedians in the country. His sketch group, WOMEN, has gained a notable fan-base and was named #1 on LA Weekly’s top comedy acts to watch in 2014. Jake was also named the #3 stand-up comic to watch in 2014 by Splitsider. He loves cats.