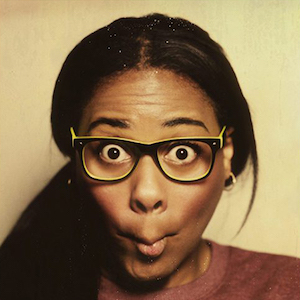 Nina Daniels is an LA based stand-up comedian, actor and content creator originally from Long Island, NY. Nina’s youtube video My Man Is a Jewmaican  was featured on the front pages of both Funny or Die and Elizabeth Bank’s WhoHaHa.com. Nina TV appearances include Season 3 and 4 of IFC’s MARON, Showtime’s MASTER’S OF SEX and she can be seen in the Sundance Award winning film PARIAH. Nina is currently developing her own half hour comedy which she will star, write and produce. Every last Tuesday of the month you can find Nina at the Nerdmelt Showroom hosting one of LA’s hottest new shows Nina Daniels Presents: The Playground. Produced with Brianne Trosie (Producer Funny or Die).

Nina can be seen on some of your favorite alt stand-up shows including The Meltdown w/ Jonah and Kumail, The Super Serious Show, Hot Tub, The New Negroes, Night Train with Wyatt Cenac, Comedy at the Knitting Factory among others. You can also see at comedy clubs across the country including the Hollywood Improv, Punch Line SF, Zannies, Caroline’s and many others.