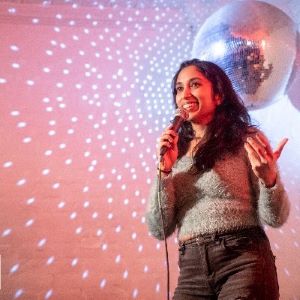 Subhah Agarwal (@Subhah) joins the ladies this week to talk about Birthday Cake ice cream, being a sore loser, and 4H club. The ladies also discuss indoor skydiving, trying to use neighbor’s pools, and debating whether or not Lumiere is a fuckboy. They answer a lady problem from a listener who’s looking for advice on how to look presentable for work with little effort.

Join us over at Patreon.com/LadytoLady to get access to bonus content and hear some juicy stories from our weekly Top Secret Sessions!

Cook delicious meals at home with easy step-by-step instructions with Green Chef! Use code “LADY80” for $80 off your first month plus free shipping on your first box.

Subhah Agarwal has brought an honesty to her comedy that will leave you saying “I didn’t need to know that.” Subhah has written for”The Jim Jefferies Show”on Comedy Central, and “Comedy Knockout” on TruTv, amongst others. You can also catch her jokes live at stand up comedy clubs across the country. If you don’t want to leave your couch, you can see her late night debut on NBC’s “A Little Late With Lilly Singh.” She’s also appeared on season three of HBO’s “Westworld”, on TruTv’s sketch comedy “Friends of the People”, and as herself on MTV2, Comedy Central, and Gotham Comedy Live.