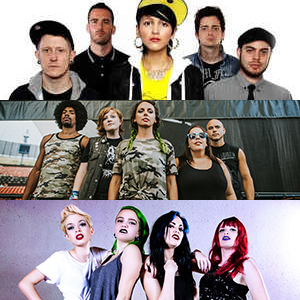 Brandie and Barbara are live from Warped Tour! Listen in on interviews with Sonic Boom Six, Doll Skin and War on Womxn!

Doll Skin: a revved up rock n’ roll’ band from the desert of Phoenix, Arizona who have split the difference between rock, punk, and pop, and even utilize some metal influences. After being touted by the press with their 2015 debut EP as some kind of a millennial second coming of The Runaways, vocalist Sydney Dolezal, guitarist Alex Snowden, bassist Nicole Rich, and drummer Meghan Herring went on to destroy expectations, showing the world that pure rock fury has no age requirement.

The band went into their collective career as teenagers. Hitting the road and lighting up stages with the likes of Metal Allegiance, The Dead Kennedys, DRI, Social Distortion, Otep, Lacey Sturm, Fire From the Gods, Hellyeah, Escape the Fate, Stitched Up Heart, One Eyed Doll and more, appearing on Shiprocked 2016 and 2018, even testing nationwide territory on several runs as a headlining act.

After meeting at the Phoenix School of Rock in 2013, the young band came to the attention of Megadeth bassist, David Ellefson, who took them under his wing, and together they pursued a collection of West Coast dates. 2015 saw the release of EP In Your Face, through Ellefson’s own imprint EMP Label Group, distributed via Megaforce Records (also known as the launching pad for legendary big 4 thrash bands Metallica and Anthrax and many more.) and Cargo Records in Europe. Followed by the release of their full-length, 2016’s IN YOUR FACE (AGAIN), produced by Megadeth bassist, David Ellefson.

Doll Skin’s colorful brand of hard rock has garnered massive worldwide press and airplay through four singles, “Family of Strangers”, “Wring Me Out”, “Let’s Be Honest”, and “Furious Fixation”, including two months of repeat spins on Rodney on the Roq on the World Famous KROQ, grabbing rotation and winning cage matches all over the US, topping playlists in Japan, and finding a home on playlists across Europe and the US, with the album being most added at CMJ Metal Radio-twice!

The band made an appearance in AP Magazine’s 2016 list of “7 of the Best Rising Bands Under 21”, and winning STONE CHROME RADIO’s LISTENERS CHOICE AWARD for “Female Fronted Band of the Year”, and launched 2017 with the driving force of a new full length album, MANIC PIXIE DREAM GIRL. Followed by performances on the West Coast dates of the 2017 VANS WARPED TOUR, Doll Skin wraps up the year with a spot on Billboard’s Top 40 Mainstream Rock Indicator chart, big plans for 2018, and no intentions of slowing down.
_________________________
War On Women is a co-ed feminist hardcore-punk band. Formed in Baltimore, MD in 2011.
_________________________
Sonic Boom Six (often shortened to SB6) are a five-piece band from Manchester, United Kingdom. Their eclectic sound combines different elements of several genres and has been described by Kerrang! as “taking ska, pop, grime, dubstep, punk and metal apart, then rebuilding them as a hyperactive hybrid”. Their lyrics tend to focus on social commentary with a live show known for “clashing activism and good times”. The band’s influences include Bad Brains, Public Enemy, The Fugees, The Specials, The Streets, and The Clash.