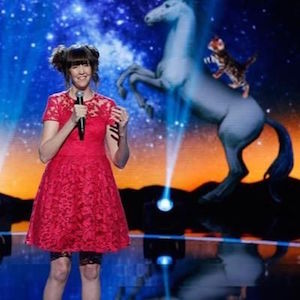 Andy Erikson’s love of cats and unicorns is only surpassed by her love of performing standup comedy. In 2015 Andy placed in the top 5 on NBC’s Last Comic Standing and in 2016 she played Chanel #7 on Ryan Murphy’s television series Scream Queens on Fox. Andy intertwines silly one-liners with whimsical stories in a playful but thought-provoking way. She was once a semi-finalist for the Andy Kaufman award and has won several comedy competitions and performed at prestigious festivals over the years. Her favorite thing about comedy is making friends.