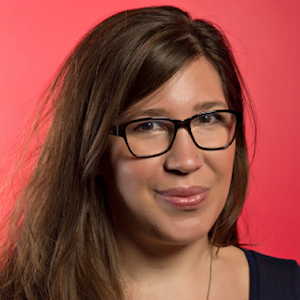 Alison Leiby is a stand-up comedian and writer in New York City. She grew up in Severna Park, MD with two wonderful parents, no siblings, and lots of alone time (also, for a brief time, a cat, until everyone agreed they weren’t a “pet family”). All of that alone time led to memorizing the dialogue to movies like Airplane! and History of the World and repeating the lines to groups of adults without ever understanding why they were funny, just that they got laughs.

After four very cold years in Ithaca, NY at Cornell University, Alison graduated with an English major. She landed an internship at The Onion A.V. Club and picked up a few freelance writing gigs, but it wasn’t until a storytelling class with Kevin Allison years later that she began performing. From an appearance on Risk! and a few tries at The Moth, Alison transitioned more into stand-up, though continues to perform on storytelling shows and podcasts around the city.

Currently, Alison is a copywriter for Comedy Central, freelances both alone and with writing partners for the various outlets listed on this site, and performs stand-up around New York. In 2013 she was a featured performer at the Bridgetown Comedy Festival where she also met her now writing partner Alyssa Wolff.