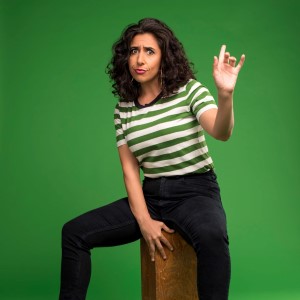 Happy New Year everyone! The ladies are ringing in the new year with guest Anna Valenzuela (@AnnaVisfun) to chat about the politics of swimming pools, their favorite chonky animals, and bungee jumping vs. skydiving. They answer a lady problem from a listener with a double dose of terrible roommates.

Anna Valenzuela has a radiant smile that’s wonderfully at odds with her dark material. A trained black-belt, she’s fought her way to the top of LA’s competitive stand-up scene with sheer force of will and killer jokes. She can easily roast the audience, other comics, and herself with equal aplomb. Anna’s skills earned her a spot on Comedy Central’s Roast Battle, where she emotionally destroyed her opponents while maintaining her balance in kitten heels.

Her warm nature draws audiences in, and her expertly-crafted bits keep them coming back for more. She’s in-demand in LA and elsewhere, having been featured as for three years running at Broke LA, and also making regular appearances at the Comedy Store, and the Improv. She’s traveled out-of-state to festivals like All Jane and the Flyover Comedy Festival, and was a standout in her hometown at the Second City’s Los Angeles Diversity in Comedy Festival. Accolades have come from other comedians too – Jackie and Laurie featured Anna as the comic of the week on their far-reaching podcast. As much in demand for her opinions as her jokes, Anna’s appeared on Fangirling streaming on Nerdist, and she hosts two podcasts: 12 Questions, an in-depth look at sobriety, and Bruja-ja, where three Latinas dish on all things Latinx.