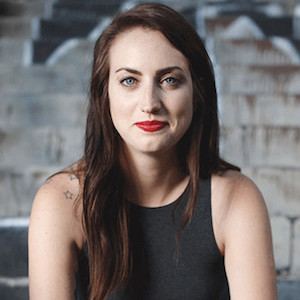 Brittany Ashley hails from Chicago where she studied sketch comedy writing and stand-up at Second City. After the debut of her sketch show ‘Hindsight For Sore Eyes’, Brittany continued to write and direct all-female sketch shows all over Chicago: ‘It’s Pronounced Kevin’, ‘Courtney Cox’s Bangs’ and ‘It’s Still Pronounced Kevin’.

Now based in Los Angeles, she’s most well-known for video content she created while at BuzzFeed Motion Pictures. Her credits there include: creating/writing a period comedy called “Lesbian Princess” about a princess in the Middle Ages who isn’t out to her royal parents, writing BuzzFeed’s first monetized web series which was #1 on iTunes for months titled “You Do You” and writing/producing viral short films about topics like abortion and emotional abuse (“Unaware” garnered over 10 million views and 300K shares in less than a week).

She has recently acted in Gente-fied, a series by Macro, executive produced by America Ferrera, as well as SeeSo’s Take My Wife.