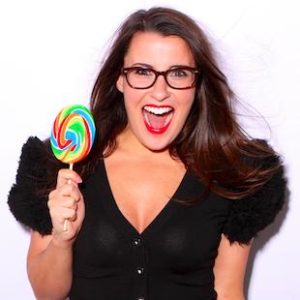 Caitlin Durante co-host of The Bechdel Cast discusses the Bechdel Test, some surprising movies that pass, some surprising ones that don’t, the best kinds of slimes, Barbara and Caitlin begin an abstinence race, they play myspace, discuss the in and outs of Hooters, and how to keep dating comfortable and interesting.

Caitlin Durante is a Los Angeles-based comedian, writer, producer, podcaster, instructor, painter, and other nouns.
​
Caitlin does a bunch of standup, and she has participated in festivals like the Women in Comedy Festival and the Out of Bounds Comedy Festival. She performs all over the country, including one time in the basement of a McDonald’s in Pennsylvania. See Caitlin at her shows!
​
She is also the creator and co-host of The Bechdel Cast, a comedy podcast that examines the portrayal of women in movies through an intersectional feminist lens. She is a comedy and writing instructor and has taught at places like The Ruby, The Los Angeles LGBT Center, The Nerdist School, and Boston University. She’s the producer and host of various live comedy shows, like The Special Occasionally Show and Luck of the Draw, which Thrillist named one of the best underground comedy shows in LA. Caitlin also served as the Program Director of the NerdMelt Showroom from Fall 2015 to Spring 2018, when it closed and now we’re all very sad about it.