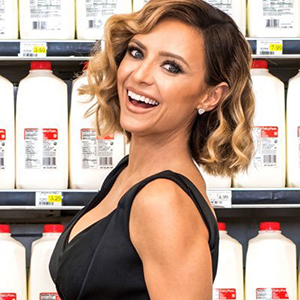 I’ll See You in Paris – with Christine Lakin – Episode 241

Atlanta native, Christine Lakin is probably best known for her role as “Al” in the 90’s sit-com Step By Step, but you may have seen her more recently Wednesdays at 8pm on the POP Network in her new series, Hollywood Darlings. Christine Exec produces and stars alongside Jodie Sweetin (Fuller House) and Beverley Mitchell (7th Heaven) in this highly improvised comedy, loosely based on their real lives and friendship. Christine has also appeared in dozens of films and TV shows such as Modern Family, Mothers Day, CSI, The League, Melissa and Joey, Valentines Day, Veronica Mars and You Again. You’ve probably heard her voice in multiple roles on FOX’s Family Guy, Cartoon Network’s Clarence and as Jane in The Walking Dead game, Seasons 1 and 2. She is the voice behind PeeBee in EA’s Mass Effect: Andromeda, launching March 2017. She hosts regularly for CMT, VH1 and E!, most recently co-hosting The Big Morning Buzz with Nick Lachey and The Soup Investigates with Joel McHale.

Ms. Lakin is a nominated choreographer in her spare time, whose work has appeared on HBO’s Westworld, True Blood, and ABC’s The Goldbergs, on which she is in her 4th season. Christine has also performed in several acclaimed theater productions, most recently as Clarice Starling in the cult-hit Silence, The Musical (LADCC award) and dozens with LA favorite, The Troubadour Theater Company. She is well known for her numerous audio book narrations, including The Coldest Girl in Coldtown by Holly Black and Broken Monsters by Lauren Beukes, winning raves as “…one of the most remarkable books of the year”.

As a producer, Christine is the creator of the hit storytelling show, Worst Ever, which ran to sold-out crowds around Los Angeles and New York before being developed and sold as a series with Thank You Brain Productions. You can now find it in podcast form on AudioBoom and iTunes. Recent guests have included her Hollywood Darlings co-stars, Tony-nominees, Step By Step castmates and more.

As a writer, she has sold scripted content to MTV, Hulu, and has developed series with Whoopi, Inc., Campanario and Momentum TV. Her blog about every day life as a mom, her obsessions with food, cooking, travel and style and other rambling thoughts on life can be found at christine-lakin.