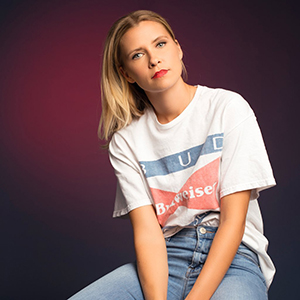 Mo Welch joins the ladies to discuss half marathons, anonymous emails, crushes, the singularity and more!

Mo Welch is a stand up comedian and cartoonist. She appeared on CONAN in January of 2018. Her 10 part animated series BLAIR debuted on TBS Digital in January 2018. She starred in Foul Ball on CBS, Hulu’s Coming To The Stage and appears in season 2 of Amazon’s Gortimer Gibbon’s Life on Normal Street and season two of Life in Pieces on CBS. She has worked as a writer for Nickelodeon, TBS and CBS.

Mo runs a live talk show called The Mo Show at The Virgil on the third Tuesday of the month. Previous guests like Rachel Bloom, Cecily Strong, Tom Wilson, Rich Fulcher and that guy that walks around Hollywood dressed as Jesus.

The Chicago Reader called her “Hysterically Brilliant” and Splitsider calls her “impossibly cool”. Along with her comics, she was featured on Buzzfeed, The A.V. Club, Serial Optimist and is a regular comics contributor to Hello Giggles and BuzzFeed.