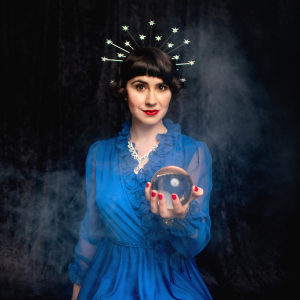 Elizabeth Messick (@sirenofmagic) joins the ladies to talk about what it’s like being a female magician, how Elizabeth got into magic and they talk about the similarities between comedy and magic. They then play the Myspace game and answer two lady problems about a boyfriend who doesn’t drink and a friend who is a conversation dominator!

Elizabeth Messick, “The Siren of Magic”, is a Los Angeles based magician who dazzles and bewilders audiences with her unique combination of beautiful magic and mellifluous song.

Elizabeth’s blend of magic and music from a bygone-era has been featured in publications such as The Washington Post, on KTLA, and in the LA Times; and performed alongside acts like Snoop Dogg, Reggie Watts, and Paris Hilton.