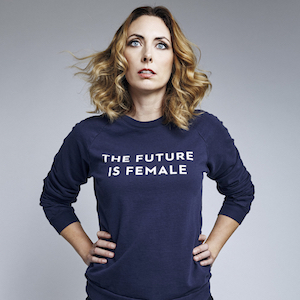 Nobody Wants a Durst Moment – with Erin Gibson – Episode 295

Erin Gibson (@Gibblertron) talks with the ladies about the nuances of Cats the musical, the ladies get custom-made vagina pins from a fan (thanks Emma!), Erin gives tips on how to be a confident director and own your set, and the ladies learn about Lilith being banned from the Garden of Eden for getting too kinky with Adam. They answer a lady problem about dating with an STD.

Guest Bio
Emmy-nominated Southern loudmouth Erin Gibson is an expert at mixing social commentary, political satire, and vagina jokes, into neat little comedy packages. Base in Los Angeles, she co-hosts & co-created “Throwing Shade” the award winning political absurdist comedy podcast and the live show & TV show by the same name. She developed her social commentary chops as the host of “Modern Lady” sharpened them writing and directing political sketches for Funny or Die, where she also created the long running, Emmy-nominated “Gay of Thrones” starring her real-life hair stylist, Jonathan Van Ness. You’ve seen her on Parks and Rec, Community, Key and Peele, the Kroll Show, and you’ve heard her on Comedy Central’s Jeff and Some Aliens, but she’s best known as “the face of State Farm’s Rental Insurance trip-fold brochure.”