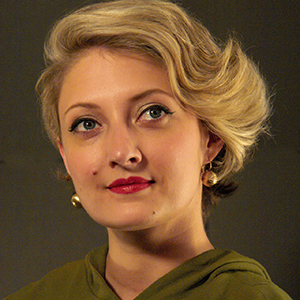 I say my name — Glennis — a lot because it’s a name you ma have never heard; it’s Welsh. I’m Irish. There are conflicting stories about where the name came from so I just tell people I was named after Chuck Yeager’s plane/wife. He wasn’t married to his plane, his plane was named for his wife.

I lived in New York for 15 years where I performed musical improv with the UCB Theatre, did voice over, commercials, and worked on The New Electric Company.

Now I’m in LA with my husband, with whom I have a web series with Awestruck called Almost Divorced talking about how we came back from the verge of divorce. Together, we have a cute patoot son who will never be an actor.

Now ten fun facts about me:

2. When my father passed away in 2013 I started climbing trees and dyed my hair pink (see: left).

3. I have a white Scottish Terrier named Gilda Raddog McArfy.

4. I never went to college after graduating from high school, but I did move from CO to NY with $500 at the age of 18.

5. That’s not true, I took one semester of college this year; I studied Art History and Film and got straight As and then I quit.

6. I have blood floating around in my right eyeball from a singing injury.

9. My entire life, school was only closed twice due to snow.