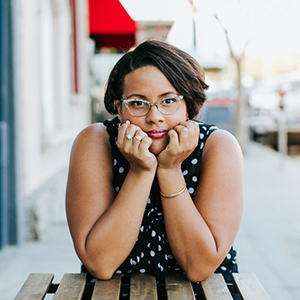 Madison is from Los Angeles, California by way of Dallas, Texas. She is a standup comedian, writer, actress, and host.

Most recently Madison performed standup on the Comedy Central showcase, Comics to Watch at The Hollywood Improv. She has opened for Maria Bamford, Al Jackson, and Colin Kane.

She produces the popular monthly comedy show, Gentrification, with the Thigh Gap Comedy crew.  Her standup has been featured on WhoHaHa, Funny or Die, Buzzfeed, and Refinery 29. And has performed at The SF Sketch Festival, Broke LA Festival, and Laugh Riot Grrrl Festival.

In 2018, Madison played a small role on the upcoming Comedy Central Pilot, The New Negroes, directed by Lance Bangs.

Recently, she performed standup on Put Your Hands Together. She also has been a panelist on FOX’s Empire Pre-Show Live. In her standup, she uses ultra personal experiences to discuss race, gender, and politics, all through a feminist lens.

Madison also surprised her Mom on Buzzfeed’s channel As/Is with a makeover for Mother’s Day.

In addition to standup and acting, Madison previously hosted the podcast Mixed Up with Bianca & Madison. Where Madison and fellow comic Bianca Cristovao interviewed other mixed race people in the entertainment industry.

In 2015, Madison produced and starred in the sketch show Smile, Baby which tackled catcalling at The Hollywood Fringe Festival with The Others Theater Company. There she won a Encore Producer’s Award for her work.

Madison studied acting at Los Angeles County High School for the Arts as well as The Royal Central School of Speech and Drama in London.