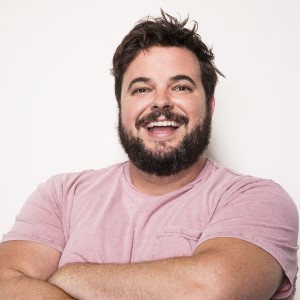 Jon Gabrus (@Gabrus) is here to talk with the ladies about skydiving, his dream celebrity couple sex tape, and skydiving. They also discuss peeing outside, Margaritaville, and bare feet on planes. They answer a lady problem from a listener who’s concerned about her boyfriend’s friend being overly flirtatious with him.

Join us over at Patreon.com/LadytoLady for bonus goodies! Just $2 a month can get you access to some sweet ad-free episodes.

Upgrade your suitcase game with Away! Go to AwayTravel.com/LADY and use promo code “LADY” at checkout for $20 off of brand new suitcase.

Jon Gabrus can next be seen in the indie “Fourth Man Out” and Hulu series “Real Hotwives of Las Vegas” He has previously appeared in HBO’s “Muhammad Ali’s Greatest Fight” alongside Ben Walker; as the character ‘Gabrus’ in the Film “Flock of Dudes;” as the lead in the Yahoo Comedy “The Fuzz;” and in the SXSW breakout comedy “Awful Nice.” He recurs as Gabe on TVLand’s “Younger.” He has appeared on NBC’s “30 Rock” and has guest starred on ABC’s “Happy Endings,” “Workaholics,” “NewsReaders,” and “Comedy Bang Bang.” Jon hosted MTV’s “The Substitute” for two seasons, TruTV’s “Hairjacked,” the Comedy Central pilot “Highdeas” and his own show, “Gabrus on Rugby” for BBC-America. He can regularly be seen dispensing his comedic wit on MTV2’s hit shows “Guy Code,” “Girl Code,” and “Wild N Out.” Jon has written for the Spike TV “Video Game Awards,” College Humor, ComedyCentral.com . Jon can be seen performing weekly at UCBLA with “Your F’d Up Family,” “ASSSSCAT” or in his one man show “Black Out Drunk.”