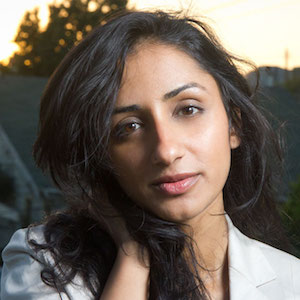 Kiran Deol is a British born Harvard graduate and English major raised in Boca Raton, FL. The day after graduating, she started making a documentary in Nepal about women rebel soldiers called Woman Rebel. It was shortlisted for an Oscar, nominated for an Emmy, a winner of the IDA Award for Best Documentary, and bought and aired by HBO domestically. Following the film, she was jonsing for fiction, and wrote for CBS’s Diversity Showcase that led her into the world of writing and performing standup comedy. Appearances include Bridgetown Comedy Festival, Vice’s Soul Food on Munchies, The Meltdown Show, Hulu’s Comedy Dynamics, Live at Gotham, Spotlight California, and 16 episodes of this season’s Best Ever on Tru TV, as well as the soon to be released Acting Out for MTV. Features include Comedy Time, Jezebel, BBC Radio, and Bitch Magazine as One of Six Comedians You Don’t Know Yet But Should. TV credits include How to Get Away with Murder, Mindy Project, Modern Family, Weeds, Parenthood, Greys Anatomy, Newsroom, + Nicky Ricky Dicky and Dawn. Film credits include a lead in the independent feature filmFarah Goes Bang, which debuted at Tribeca and won the first ever Nora Ephron Prize; and a supporting lead in Murder in the Dark, currently airing on Showtime. But the past is all bullshit. Her goal now is to take that filmmaking background and combine it with that comedy + writing background to make some sweet sweet fiction like the bad ass ladies (Issa Rae, Lena Dunham, Rachel Bloom, Frankie Shaw) doing the bad ass thing.