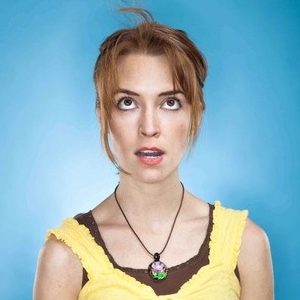 Mary Mack was raised near Webster, Wisconsin, and moved to Minneapolis, Minnesota to pursue comedy after some time spent in Nashville, Tennessee for music school and music performance.

She taught elementary/middle school band and music in Oshkosh, Wisconsin and Nashville, Tennessee and played in a polka band in both states. She currently performs as a comedian and folk humorist. Her essays and sketches have been heard on public radio in numerous states. Mack has performed in the Vancouver Comedy Fest, HBO’s Andy Kaufman Awards, and the Just For Laughs Festival in Montreal, and has been seen in a variety of television comedy shows as herself. She is married to fellow comedian Tim Harmston.

Mack voiced the character Dylan Beekler in the first season of Fox’s animated television series Golan the Insatiable, and had a memorable guest voice appearance as a drunken Zeeble in Aqua Teen Hunger Force on Adult Swim (Cartoon Network). Other television appearances include Last Comic Standing, Conan, and Last Call with Carson Daly.