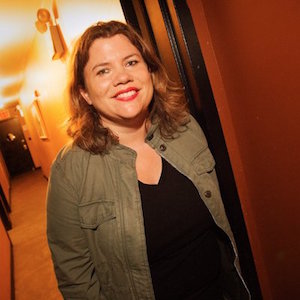 Michelle Biloon chats with the ladies about forced socialization, the horror of dealing with other parents, and her adjustment to living with Multiple Sclerosis. The ladies also chat about Magic Mike XXL, slides, adult space camp, and more. They answer a lady problem from someone whose boyfriend won’t let them bring their cat when they move in together.

Go to QuitWithZero.com/LADY and for
a limited time our listeners can get their first month of the Quit Kit to stop smoking for just thirty-seven dollars!

To start your free wedding website and also get $50 off your registry on Zola, go
to ZOLA.com/ladytolady.

Michelle Biloon is a standup comic straight outta Philly by way of Los Angeles by way of Austin. You may have heard her on the popular podcasts Comedy Bang Bang, 2 Dope Queens, Doug Loves Movies, or Never Not Funny. She’s also appeared on Chelsea Lately, The Late Late Show with Craig Ferguson, Comics Unleashed, Comedy.tv, and Premium Blend.

Want to know more about Michelle? She loves Judge Judy. She does the New York Times Crossword Puzzle every day. And she is motherfucking hilarious.

Her mother has been quoted as saying, “I watched the tape of her before I left for bowling and I laughed so hard that I had to go redo my makeup.” And that’s the truth, jackasses.