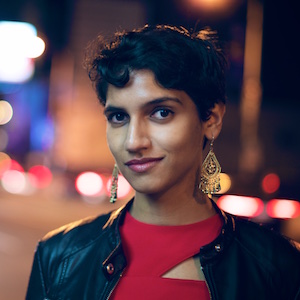 Happy Halloween! This episode is all kinds of spooky with guest Pallavi Gunalan and the ladies talking about real spiders as Halloween decorations, costumes, the horrors of keeping with with beauty trends, and more! They answer a lady problem about how to keep your personal space (and sanity) while commuting on public transit.

Go to MeUndies.com/L2L to get 15% off AND free shipping on your first pair of the super comfortable Me Undies.

Get $20 off of your first order of contacts at SimpleContacts.com/LadytoLady or enter promo code LADYTOLADY at checkout.

Get $45 off of your first month of Talkspace by going to Talkspace.com/L2L and entering promo code L2L.

Pallavi has performed on booked shows at The Comedy Store, The Hollywood Improv, Westside Comedy Theater, Flappers Comedy Club, The Ice House, HaHa Cafe Comedy Club, Seattle’s Comedy Underground, Wiseguys Comedy Club, and the Canvas Laugh Club (Mumbai). She performed vocal skits on Ruby Ibarra‘s hit debut album, Circa91, and has opened for Todd Barry, Preacher Lawson, and many other amazing comedians. She produces Oversharing Comedy, and, as a co-producer of Facial Recognition Comedy, was highlighted in Splitsider and co-hosts the Facial Recognition Comedy Podcast.