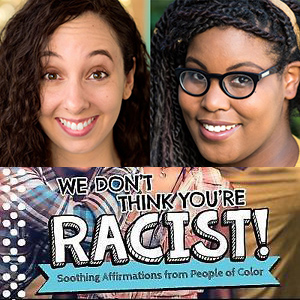 Amanda Meadows is a humor writer and editor in West Hollywood, CA. As co-publisher of The Devastator, she has been featured on Paste, The Verge, and ComicsAlliance. Amanda was recently named a 2015 Rising Star by Publishers Weekly.

Robin Higgins is a comedian from Oakland, CA. She’s a writer for the Maude team ‘Karate Karate’ and the co-author of the book ‘We Don’t Think You’re Racist – Soothing Affirmations From People Of Color.’ She was also a member of the Mess Hall Team ‘The Up and Up’. She’s been a guest writer for Revolver, co-wrote and performed in a spank about the crew of Star Trek TNG’s sex lives, and sometimes acts in 301 sketch shows. Some of her non-UCB comedy related accomplishments include being a co-founder of the comedy website ‘The Higgs Weldon,’ winning a Moth StorySlam, and being on podcasts like Maddox’s ‘Biggest Problem In The Universe’ and Maximum Fun’s ‘International Waters.’ Also, once she got something published on McSweeney’s, which was super fun.