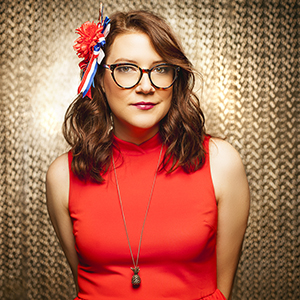 Sara Schaefer is a critically acclaimed stand up comedian, writer, and producer currently based in Los Angeles. She was the co-host of MTV’s late night show Nikki & Sara Live. Sara has appeared on @Midnight, John Oliver’s New York Stand Up Show, Late Night with Jimmy Fallon, and Inside Amy Schumer. She won two Emmy awards for her work at Late Night with Jimmy Fallon, and has written for Ed Helms’ Comedy Central special The Fake News with Ted Nelms, Problematic with Moshe Kasher, Not Safe with Nikki Glaser and Who Wants to Be A Millionaire. Her digital series Woman Online debuted on Seriously.TV in February 2017. Recently, Sara’s stand up show Little White Box debuted to a sold-out run at the 2017 Edinburgh Fringe Festival.

Sara grew up in Richmond, Virginia, and got her higher learnings at the College of William & Mary. After a year of weirdness in New Orleans, she moved to New York City to pursue comedy. Working by day as an analyst at a securities fraud law firm, she pursued comedy at night, performing sketch, stand up, and improv all over the city. She gathered critical acclaim for her bi-weekly stage show, “Sara Schaefer is Obsessed With You,” and has produced several live shows over the years, including “Video Gaga” at the Upright Citizen’s Brigade Theatre.

In 2006, Sara became the host of AOL’s on-line music/comedy show, The DL. While at The DL, she interviewed hundreds of musicians and celebrities. From there, she began blogging for BestWeekEver.tv, and then, in 2009, she began working as the head blogger for Late Night With Jimmy Fallon. Her work at Late Night earned her two Emmy Awards, a third Emmy nomination, a Webby Award and a Webby nomination.

Sara met Nikki Glaser in 2010 and the two began their podcast You Had To Be There. The podcast quickly grew and eventually led to their show at MTV. In 2011, Sara was a writer for Who Wants to be a Millionaire, for which she was nominated for two Daytime Emmy Awards.

Sara’s web series, Day Job, was released in 2014 and was named one of the 100 Best Web Series by TimeOut New York.