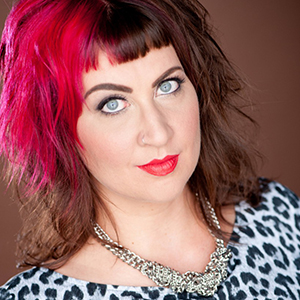 Virginia Jones’ comedy is intellectual, absurd, and has a lot of animals in it.  She was delighted to be Jackie Kashian and Laurie Kilmartin’s Comic of the Week, and to appear on hot podcasts like Jackie’s Dork Forest and the legendary Jordan, Jesse, Go!

She came up in Portland, OR, where she returns to do the Bridgetown and All Jane Festivals, and as a feature at Helium comedy club-with great talents like Arj Barker, Sebastian Maniscalco, and David Koechner.
She was a semifinalist in the 2013 San Francisco comedy competition and her monthly, GLENDALIA, was applauded in the LA weekly. She has a YouTube channel with 80K hits,a website with millions of visitors, and is a contributor to hot internet properties like Buzzfeed and Love.TV. She has appeared at Santa Cruz, Chico, LAFF, Women in Comedy, and lots more comedy festivals.
Her album, Gothic American, was on WhoHaHa’s list of prominent women comedian’s albums in 2016. She was a contributor to both Laughing Matters, an art exhibit about women in comedy, and The Girl In The Show, a book about three generations of women in comedy.

Virginia Jones believes comedy is an artform, just like her kind of liberal, uppity shits.