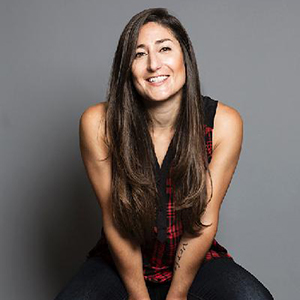 Leah Kayajanian grew up in Oklahoma, and she started performing standup in 2006, working in several clubs in Tulsa, Little Rock, Chicago, New York, San Francisco, San Diego, Wichita, Denver, and Boston. In 2009, she won the title “Funniest Person in Oklahoma City” before moving on to a bigger pond.

Since her move to L.A., Leah has become a non-paid regular at the World Famous Comedy Store and is a top-ranked performer on the Store’s widely popular live show, Roast Battle, winning the Roast Battle Royale tournament at LA Riot Festival in January 2016, performing on Comedy Central’s Road to Roast Battle in July 2016, and Roast Battle, Season 2 in January 2017.  Leah often hosts at the renowned Hollywood Improv, and you can also catch her at the Improv clubs in Las Vegas and in Palm Springs. In 2013 and 2015, she performed at Portland’s highly acclaimed Bridgetown Comedy Festival, in 2014, she made it to the semi-final round of NBC’s Standup for Diversity Showcase, and in 2015 and 2016, she was featured on Fox’s Laughs TV.

Despite the hours spent honing her stand-up and writing and working at her dumb day job, Leah somehow found time in her busy schedule to give birth to the entire Universe.  For her nurturing nature and stretched out vagina, Leah was officially named “Everybody’s Mom” in July 2013, and so naturally, she is Your Mom, and she’d really like you to treat her with the respect Your Mom deserves. Like maybe a phone call every few months.  Come on.  It wouldn’t kill ya.