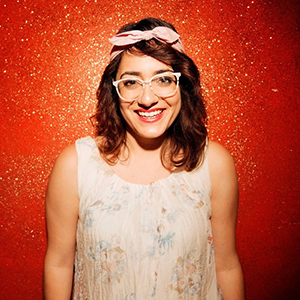 Marlena Rodriguez joins the ladies at a live show in Portland. They dissect the art of elbow butt pictures, the inspiration that is Skatman, Barbara gives a play by play of her tinder date that leads to an epic walk of shame.

Marlena Rodriguez is a her-spanic comedian who has been writing and performing comedy since 1989. She’s toured with The Second City, done stand up across the country, and performed in a Lincoln Center benefit called, Leave It To Beavers: A Night With Tina Fey and Friends. Marlena has written for Netflix’s Unbreakable Kimmy Schmidt, George Lopez’s Lopez, and JG Quintel’s upcoming TBS project, Close Enough.

In 2016, Marlena was named one of Comedy Central’s Comics To Watch as part of the New York Comedy Festival. Though, you may have already seen her at Glasgow International Comedy Festival, San Francisco Sketchfest, Limestone Comedy Festival, opening for Adam Devine, Gilbert Gottfried, Aparna Nancherla, or SNL’s Michael Che. Marlena has been described as “equal parts sly, crazy, sassy, subdued and has clearly studied closely that particular flavor of Midwestern wack-a-doodle”.

Marlena co-wrote and starred in the hit web series, We Have To Move, about a couple on a dead end search for an apartment on Craigslist. She wrote, produced, and starred in, Bouncers, a web series about two lady-bouncers, on Broadway Video’s Mas Mejor channel. And last Fall, Marlena became a fellow of the Sundance Institute Episodic Lab with her script DMV.